Three quarters of the effort needed to reduce the average carbon footprint of people living in France depends not on individual choices but on decisions by public and private organisations. Economic stakeholders such as Aderly play an important role and measuring the carbon impact of local areas is now essential.

The study conducted by Utopies on behalf of Aderly (using the LOCAL FOOTPRINT® and LOCANOMICS® modelling tools) aims to understand and quantify the carbon footprint impact of the companies supported by the Agency over the last 10 years.

The 574 companies supported by Aderly have created 9,917 jobs and generated €1.3 billion of production, including €0.7 billion in response to local demand in Amelyse (the Lyon and Saint-Etienne metropolitan area), representing emissions of 51 kt of carbon equivalent (CO2eq). 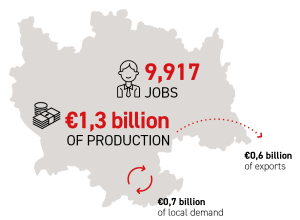 If these 574 companies were not present locally, it would have been necessary to import €0.7 billion of production into Amelyse, with an estimate of €628 million from France and €94 million from abroad.

So to meet local demand in Amelyse,

resulting in total emissions of 87 ktCO2eq.

Subtracting the carbon footprint associated with companies set up with Aderly (51 ktCO2eq) from the footprint that would have been generated in their absence (87 ktCO2eq), the balance is 36 ktCO2eq in favour of these companies being present in the region.

As we have already seen, the companies supported by Aderly have generated €1.3 billion of production, including €0.6 billion for exports.

These exports have led to emissions of 63 ktCO2eq for production and 5.7 ktCO2eq for transport (1.4 ktCO2eq within France, 4.3 ktCO2eq in the rest of the world).

Without Aderly, the need for €0.6 billion of production could theoretically have been met by companies in the rest of France (€246 million) and abroad (€371 million), generating:

resulting in total emissions of 102 ktCO2eq.

The balance between the carbon impact associated with exports with Aderly’s help (69 ktCO2eq) and the theoretical impact of meeting these unmet needs (102 ktCO2eq) is thus 33 ktCO2eq in favour of the companies set up with the Agency’s support.

In summary, the companies set up between 2008 and 2019 with Aderly’s assistance have helped to lower the global carbon footprint by 69 ktCO2eq (52% for local demand and 48% for exports outside Amelyse).

This figure of 69 ktCO2eq represents the emissions of 6,400 people living in France.